Trap Facilities:  The club has seven Shotgun Ranges for shooting. Fields one and two are used for trap with field two lighted.

Public Use:  The Trap fields are open to the public during Club Hours.  Shooting Instructors are available for lessons.

In Trap, there is a single target throwing machine, and the targets fly away from you.

The target throwing machine oscillates from side to side, resulting in targets that may be thrown at 45 degree angles left and right of the target house, and anywhere in between.

The trap field has 5 shooting stations arranged in a straight line, and is shot by a “squad” of no more than 5 persons.

The shooters will select the starting station of their choice. When all shooters are on their stations, the person on station 1 fires the first shot. This is followed by the person on station 2, then 3, then 4, then 5. This sequence is repeated until each shooter has fired 5 shots from the station that they are on.

At that point, the shooters all move to the “next” position (shooter #1 moves to position #2, shooter #2 to position #3, etc. Shooter #5 crosses in behind the squad, and moves to station #1.) SHOOTER #1 (who is now on position 2) fires again, and the rotation continues until all have fired 5 shots from their new stations. At that point, the rotation is repeated. (Note that SHOOTER #1 will ALWAYS fire the first shot after each rotation, regardless of what station he is on.)

The round is complete when all shooters have fired 5 rounds from all 5 stations.

As the target already has a 16 yard head start, when the target exits, the shooter must react to the target’s flight path, and adjust his lead accordingly. Typically, the targets are approx. 30 to 40 yards away when the shot is fired. For this reason, tighter chokes, such as “Modified” or “Full” are used. (An open choked gun results in a very open pattern; one with “holes” that the bird can fly through unscathed.)

Typical shot sizes used are 7-1/2, and 8. (The smaller #9 shot looses too much energy during it’s 40 yard flight to the target, and even soundly hit targets may not break when hit with #9s.) Note that shot sizes LARGER than 7-1/2 are prohibited at trap and skeet courses. This is because the larger shot sizes retain too much energy during flight, and un-necessarily extend the hazardous “shot fall zone”.

Organized trap competition does not recognize any differences between shotgun gauges. While other gauges may be used, most shooters use a 12 ga. gun. 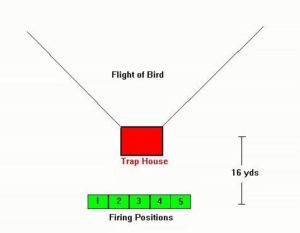