Public Use:  The Sporting Clay Facilities are not open to the public.  Shooting Instructors are available for lessons to non-members and members.

What is Five Stand Sporting Clays?

DCWC 5 Stand Field is designed with twelve (12) machines. Nine machines use standard targets. These are two crossing, three quartering, two tower from behind, one wobble, and one teal. Two machines use a rabbit targets. These are one chondel/rabbit and one wheel rabbit. Lastly, one machine use a razor-thin target called the Battue. Come out and take look at our selections and arrangement.

Five Stand has five stations, one for each shooter. These stations are referred to as “cages”. For everyone……(Safety Is Our Number 1 Concern), the shooters are required to stay inside the “cages” while shooting and until the Trapper gives the command to step out. The shooters shoot in sequence starting with station 1. The shooter that starts the round, starts the sequence for rest the round after each rotation (moving from one station to the next).

Each shooting station has a unique combination of target presentations written on a program card. One program card is placed in front of the shooter and a second program card with the same unique combination of targets is placed behind the shooter for the trapper. Rotating from station to station, the shooter is presented with targets at different viewing angles of the target as in Skeet. In addition to different viewing angles of the targets, eight of the twelve machines’ presentations are adjustable. This provides a nearly endless number of possibilities. Therefore everyday can be different, a place where routine does not exist.

The sequences are sets of target presentations. The first set is a single target. The shooter is allowed by NSCA to fire twice at the single target. The second set is usually a report pair (an “R” is placed after the target numbers, for example “1-3 R”). In the report pair, the first target is thrown and on the report of the shotgun, the second target is thrown. The last set is usually a true pair (a “T” is placed after the target numbers, for example “1-3 T”). Both targets are thrown simultaneously. The shooter decides which target to shoot first. If the shooter has special request, such as only singles or report pairs, the trapper will honor that request. The trapper wants everyone to have a good time.

Any gauge gun may be used, but by far, the 12 and 20 are most popular. Choke selection presents a challenge … some shooters prefer a double barrel gun, with one choked “skeet”, and the other “modified” for longer shots. A good all-around choke of “improved cylinder” is used successfully here. Popular shot sizes are #7-1/2, and #8. Note that shot sizes LARGER than #7-1/2 are prohibited at the DCWC facility. This is because the larger shot sizes retain too much energy during flight, and un-necessarily extend the hazardous “shot fall zone”. As Always: EYE AND EAR PROTECTION SHALL BE WORN WHILE ON THE FIELDS. 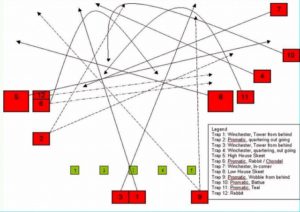